It wasn’t until much later that the hydrangea came to the Europe. In 1736, Peter Collison of Pennsylvania introduced the Hydrangea arborescens (a type of North American hydrangea) to England. However, it was botanist Grovonius who coined the name “hydrangea.” Hydrangea comes from the Latin word hydro (water) and angeion (pitcher). Thus, the hydrangea was a ‘water pitcher,’ because Grovonius thought the hydrangea flowers looked like water pitchers.

The hydrangea is also known as the hortensia. French botanist Philbert Commerson came up with the name in 1771. Although it’s not entirely clear where “hortensia” came from, sources argue that the origin of the name has to do with a female companion, perhaps his mistress, or another woman in his life. Commerson was also acquainted with the Prince of Nassau’s daughter, Hortense de Nassau.

Yet another explanation of the etymology behind ‘hortensia’ is that it means ‘from the garden’ in Latin. Hortus means garden, and Commerson is said to have located the hydrangea bloom in the garden of the King of Mauritius. Of course, this is a rather fanciful explanation, but who knows? One look at the hydrangea flower will tell you there’s plenty of magic behind it.

Hydrangeas: your environment shapes you

There are several different types of hydrangeas, each differing in both appearance and care. There are climbing hydrangesa (hydrangea anomala petiolaris), smooth hydrangeas (the previously mentioned North America hydrangea arborescens), and of course, hydrangea macophylla, the type of hydrangea you’re probably most familiar with, which are often blue.

Blue is a fairly uncommon naturally occurring color in flowers. While you may spot blue blooms at a flower shop, it’s likely that they are the product of colored dye. However, hydrangea macophylla have the ability to turn blue. Why? Well, it all has to do with the soil surrounding the hydrangea blooms.

When a hydrangea absorbs aluminum, it can turn blue. We say “can” and not “will,” because the hydrangea can only integrate the aluminum when the soil surrounding the flower is acidic. Therefore, soil that is more acidic (with a pH bellow 7) typically produces blue flowers, whereas alkaline soil veers the shade of the blooms toward pink. 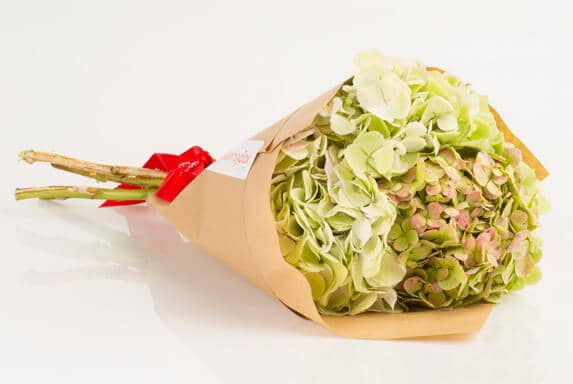 Meaning of the hydrangea

However, the same abundant characteristics of the hydrangea that represent thankfulness have also been said to represent another sentiment entirely: vanity. After all, the hydrangea is pretty out there, with its glorious bundles of blooms. We understand where this explanation comes from, but we choose to associate the opulence of the hydrangea flower with confidence as opposed to haughtiness. The hydrangea is proudly beautiful, but there’s nothing wrong with that!

The hydrangea is perfect to present to someone who has been there for you countless times. They make for lovely birthday presents, or spontaneous gestures that say, ‘I’m just glad you’re here with me.’ Because of their spectacular beauty, they’re also wonderful to gift to someone who is feeling a little low on confidence and needs a pick-me-up. 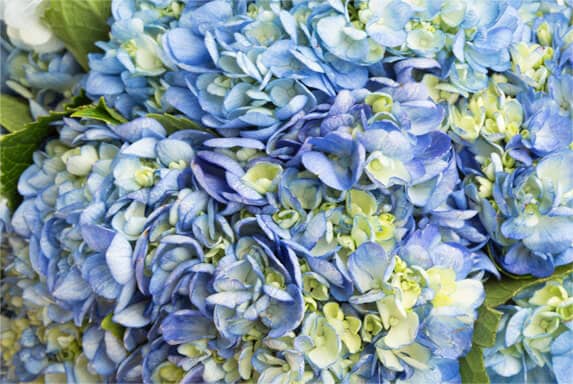 Activities with the hydrangea

All you need to make a dried hydrangea basket are hydrangeas, a vase, and a nice basket that will hold all the blooms. You don’t need to hang the hydrangeas upside down unless their stems are frail.

Make sure to trim away all the leaves on the hydrangea flowers. Leave them out in the vase without water until they’re completely dry, then delicately arrange them in a basket.

These are perfect for the holidays, or for whenever your door needs a little cheer. They’re super easy to make, and even easier to enjoy!

To make a hydrangea wreath, all you need is a wreath frame, hydrangea blooms, hot glue, and a ribbon.

Make sure the flowers are trimmed from their stems. They can be fresh or dry, but the flowers must be separated from their stems. Glue the hydrangeas onto the wreath with very strong glue. One good tool is a hot glue gun, but be careful not to burn yourself! For the final touch, tie a bow at the top or the bottom of your arrangement.

Tip: To make your wreath even more special, glue large hydrangea leaves on the arrangement as well! You can also make a ‘mixed bouquet’ by gluing other flowers (fresh or dry) to the wreath.

Caring for the hydrangea

Hydrangeas can last for several days with the proper care. In fact, there are a few tricks you can follow to keep your blooms fresh and beautiful for as long as possible. One trick is to use hot water – you heard us! Trim each hydrangea stem under water individually. Immediately after trimming it, place the flower in the hot water for 30 seconds, then in a vase of room temperature water. Because you should do all of the steps quickly (trim, seep, switch), we recommend working with each hydrangea stem individually.

You may want to also keep your hydrangea arrangement mixed your BloomsyBox feed in a cool room overnight. Home Guides recommends then removing your flowers, washing and sterilizing the vase with 1 part bleach and 9 parts water, refilling it with fresh water and feed, then transferring your flowers back. However, if you don’t want to bother with cleaning your vase so extensively, simply remember to change your hydrangeas’ water every other day. You should also be sure to trim away any dead leaves. That is, unless you want to save them for a future project such as a wreath.

Hydrangeas should be kept out of glaring sunlight, preferably in a cooler room. One idea is to set your vase of hydrangeas in the center of your dining table, or in your bedroom. If you have windows, perhaps draw the blinds, or move the hydrangeas somewhere in the room that’s less directly in the sun. Good luck, and enjoy your little water barrels!