When famous explorer Marco Polo laid eyes upon peonies, he described the blooms as “roses as big as cabbages.” Although peonies aren’t roses, it’s easy to see how he might have associated the two flowers.

Peonies are large, round flowers with many petals that come in a variety of colors. Whimsical and adorable, peonies are versatile and can be used for a number of occasions, including weddings, baby showers, garden parties, and the best occasion of all: no occasion! 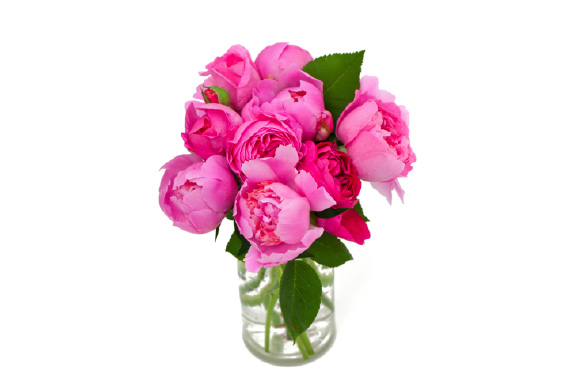 There are two different kinds of peonies: tree peonies, and herbaceous peonies. Tree peonies grow very tall – up to ten feet. Herbaceous peonies still grow pretty tall, up to four feet. While these are the two types of peonies, there are about thirty species and a whopping 3,000 cultivars. It’s possible that the peony first bloomed in Europe… around 2.6 million years ago ! Peonies are native to Asia, North America, and Southern Europe.

Peonies were very well regarded around 1000 BCE in China. According to some sources, they were adored in the Imperial Gardens, so much so that during the Tand dynasty they were given royal protection. According to Home Guides , gold peonies were once considered the exclusive property of China’s emperor. Anyone who deigned to possess a golden peony of his own could face capital punishment! Talk about a royal flower.

Peonies also enjoyed popularity during the Sung dynasty, and by the 8th century, Japan had adopted the beautiful breed.

Today, peonies even hold significance as the “ floral symbol of China. ” According to the The Encyclopedia of Cultivated Plants , the Chinese deemed the tree peony “Hue Wang,” translated as “the king’s ministers”, as well as “Fu Guide,” which translates to “wealthy and honorable”. On the other hand, herbaceous peonies had the name “Shaoyao,” which translates to “medicinal herb plant,” as well as “wealthy and honorable,” and “charming and beautiful.”

The word peony is said to be named after Paeon, the Greek gods’ personal healer. As legend has it, Paeon was studying under Asclepius, the god of medicine. The goddess of fertility, Leto, commanded Paeon to find a plant that would help women during childbirth. However, Asclepius wasn’t a fan of his student getting all the glory, and set out to kill him. Zeus decided to spare Paeon by transforming him into a beautiful peony flower.

Perhaps because of their obvious association with Paeon, peonies have been known to have medicinal value. Centuries-old usages for the peony include fixing headaches and aiding asthma. According to one source, they can improve memory, keep cholesterol down, and aid liver function. People even believed that peonies could ward off demons.

Although peonies have been known for their medicinal value, in North America peonies are grown for ornamental purposes. Peonies are relatively easy to care for. Peony plants can last a long time after planted – up to a staggering 100 years old. If you’re thinking of planting a peony plant, there’s a good chance it’ll outlive you!

In addition to the mythology and lore surrounding the peony, there are several modern meanings for it. One source suggests that peonies represent compassion, nobility, beauty, and fertility, as well as peace. In today’s Western culture, peonies are the anniversary flower for the 12th anniversary. They’re also said to symbolize prosperity and a good marriage.

With so much meaning behind the bloom, there are lots of occasions where the peony is the perfect flower.

A bridal shower, engagement party, or even a dinner party!

Since peonies are associated so strongly with marriage, it’s ideal to present a happy couple with a bunch of peonies of their own. A bridal shower or an engagement party is obviously a great time to bring peonies (pink peonies are particularly cute for these sorts of occasion). But why stop there? Let’s say one of your “couple-friends” decides to have you over for dinner. Show them you support their relationship with an arrangement of beautiful peonies. You can also give peonies to a couple celebrating an anniversary. Last but certainly not least, you can show your sweetheart you value your relationship by presenting them with lustrous peonies of their own.

A baby shower or a baby naming party

Since peonies are a symbol of fertility, it’s a lovely idea to give peonies at anything baby-related. Pink or white peonies are not only subtle and gentle in color, they’re also perfectly themed for a baby shower. A baby naming party is another ideal place to present peonies.

At a graduation party, housewarming party, or going away party

Peonies also represent prosperity. When someone is going through a major change such as a graduation, moving in or moving out, giving them a flower that symbolizes a good, lucky future is very thoughtful. The beauty of the peony alone will make the recipient smile, but the meaning behind peonies is icing on the cake.

At a funeral or memorial service

While it’s never pleasant to attend a funeral or memorial service, you can make the most the experience for the person grieving by giving them peonies. As peonies are a symbol of compassion, it’s a wonderful gesture to bring them to a person going through a hard time. Pick a color of peony that’s more on the subtle side, like white, as opposed to bright red or pink.

You don’t have to wait for something as drastic as a funeral to express sympathy toward a person who’s feeling down. You can also give a person peonies if they’re simply not feeling their best and need compassion.

CARING FOR YOUR PEONIES

Once you get your peonies, we’re sure you’ll want them to last as long as possible. To ensure maximum vase life, follow these instructions to give your peonies the proper care they need.

As soon as you receive your peonies, place them in water. You don’t need to unwrap them right away. Fill a vase with 3-4 inches of room temperature water and mix in your BloomsyBox flower feed. Trim away the bottom of the stems diagonally and quickly place them in the water. You may even want to trim the peonies underwater to ensure they’re always being hydrated. Remember to also cut away any leaves that may sit underwater. While you can unwrap the peonies at this point, you can also let them sit in the water for a few hours wrapped in order to remain standing up straight.

Peonies are thirsty flowers, so remember to replenish their water often. If the water is almost gone or very murky, replace it. If you see that the ends of the stems are rotting, trim them away. If you like, keep the peonies in a colder, light-free room overnight.

The peonies will open over the next few days. Some may bloom faster than others. They do best when they’re out of direct sunlight, so don’t stick your peonies right in the windowsill (although it’s tempting)! Peonies do best at a moderate temperature (think mid sixties to low seventies Fahrenheit). Instructions found here and here.

We’re sure once you get your peonies, you’ll be delighted. After all, these are royal flowers that have been said to cure pain and ward off demons. But we know you’ll love these flowers for their beauty and cheer. Good luck from the team here at BloomsyBox!