As luminous and cheerful as the sun itself, the golden sunflower is a popular bloom for a reason. The sunflower was born in America. Before Columbus’s arrival in the US, Native Americans were cultivating sunflowers for food consumption. Some sources believe that the sunflower has been cultivated since 3000 BC. In fact, certain archaeologists claim that the sunflower was a domesticated cop even before corn was. Native Americans used sunflower seeds and meal to make cakes and bread or blend with vegetables. However, despite the sunflower’s initial burst of popular in America, the flower was actually extensively researched and bred in Europe. Indeed, if you’re familiar with the famous painter Vincent Van Gogh, you might know he painted the blooms. 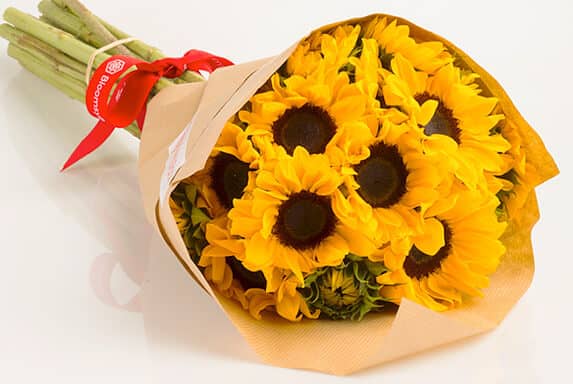 How did sunflowers end up in Europe? Well, Spanish explorers took the seeds back with them as souvenirs. Soon enough, Russian took an interest in breeding the sunflowers. It was Russia who transformed the sunflower into a type of cooking oil to widespread success. Interestingly enough, Jerry Miller, a former sunflower breeder at the Sunflower Research Unit in Fargo, stated that the Russians came up with the idea of sunflower oil because it’s a food that the Russian Orthodox Church does not prohibit during Lent.

By the 1800s, sunflower oil was massively popular in Russia and Ukraine. Soon enough, Europe began using it as well. In 1930, Canada created the first official government sunflower-breeding program. Although sunflower oil production was present in the U.S. from as early as the mid 1920s, the U.S. truly didn’t take to sunflower oil until the 1990s, when transfats such as partially hydrogenated soybean oil started falling out of favor with the American population. Potato chip makers in particular needed to find a substitute oil to fry their products in. Enter: sunflower oil!

Today, if you open up a bag of potato chips, it’s likely you’ll see “sunflower oil” listed as an ingredient. Moreover, the sunflower itself is a popular bloom for decorative purposes. Although the history of the sunflower is a long and well-traveled one, we’re happy to be able to present these sunflowers here at your door!

Meaning Of The Sunflower

As a flower that’s been used in several countries and cultures over time, the sunflower symbolizes several different sentiments and emotions. For instance, according the Victorian language of flowers, tall sunflowers represent pride, while dwarf sunflowers represent adoration. Sunflowers can also symbolize devotion. According to other sources, sunflowers are still yet emblems of loyalty and longevity.

Sunflowers make excellent housewarming gifts. Even when boxes and boxes of clothes haven’t been unpacked, a simple sunflower arrangement can make a home feel complete. Sunflowers also work well as “get-better-soon” presents for a person who is feeling ill or sad. On the other hand, sunflowers also make breathtaking displays of affection. If you want to tell someone you are completely devoted to them, a bouquet of sunflowers should do the trick.

Indeed, there are many different ways to interpret the meaning of the sunflower. However, one thing is certain: the bloom is stunning. Whether you’re gifting it as a sign of commitment or simply want to add a little vibrancy to your home, the sunflower does the job. The vivid color of the petals, combined with the striking stalk and artful leaves make this flower a true visual stunner.

Mythology Of The Sunflower 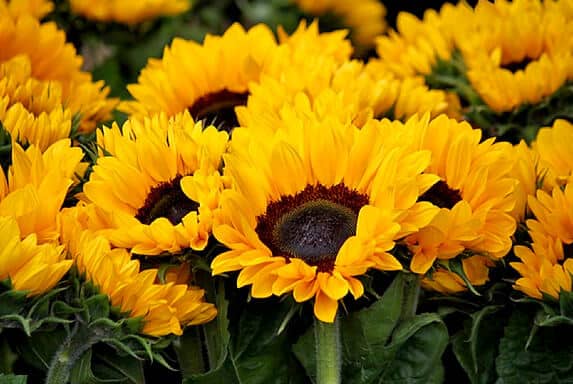 In addition to playing roles in Native American and European societies, the sunflower also has a place in ancient Greek mythology. Clytie, a nymph, was transformed into a heliotrope flower, commonly translated as a sunflower. Supposedly, Clytie fell in love with the god Apollo (or some say the sun god Helios). Although he initially loved her, Apollo soon fell for another woman. Some versions of the story suggest that Clytie told the other woman’s father of his daughter’s affair with Apollo. The father turned so angry, he buried his daughter alive. But Apollo never fell back in love with Clytie. Instead, he condemned her to live her life as a flower.

However, other versions of the story state that Clytie starved herself waiting for the sun god, Helios, to come back to her. However, Helios repeatedly avoided her, and eventually she turned into a sunflower. Clytie’s act of hopeless love is why some believe the sunflower represents such intense devotion.

Activities With The Sunflower

Sunflowers don’t have to be transformed into oils in order to be edible! You can harvest the seeds from your sunflowers and nosh on them, provided that your sunflowers aren’t treated with pesticides. Make sure to always check with your florist/flower provide that your flowers are safe for consumption. If they aren’t, your best choice is to visit a farmer’s market or an organic flower farm.

2) Over a bowl, pick the seeds out of the head of sunflowers with your own fingers or a simple tool such as a fork.

3) Keep the seeds to eat raw, or submerge them in saltwater. You can soak the seeds overnight, or boil them for two hours in salt water.

4) Completely dry the seeds before roasting them. To roast: spread the seeds on a cookie sheet and bake them for 30-40 minutes at 300 degrees F.

Tip: to give your sunflowers extra oomph, season them with salt, butter, paprika, or garlic! Like kettle corn, sunflower seeds can be flavored however you wish, so remember to have some fun!

Caring For The Sunflower 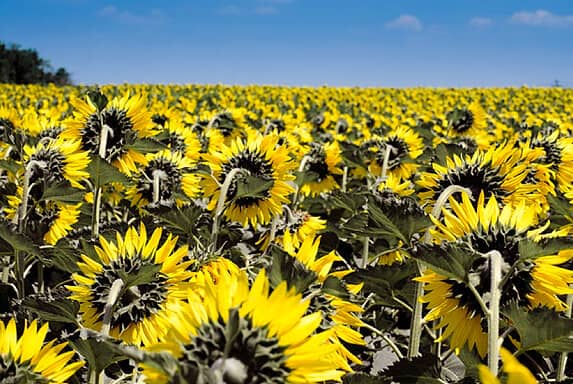 With the proper care, your stunning sunflowers can last almost two weeks! Sunflowers will make any corner of your home glimmer with happiness, so make sure you give your blooms optimal treatment. This way, they’ll continue adding beauty for days and days.

Remember to change your sunflowers’ water when it’s looking a little dingy. Keep your thirsty sunflowers hydrated so they’ll last for as long as possible. When it looks like leaves are dying, simply cut them away. You may also add additional flower feed when you change the water.

Another important factor is to keep your sunflowers in a vase that’s tall enough for their impressive stalks. Sunflowers have heavy heads, so it’s important that their stems have support from a vase. You don’t have to worry about binding your sunflowers to sticks or other such contraptions, just place your blooms in an appropriate vase.

No matter how long your sunflowers last, every moment they’re in your home will be one of delight and beauty. Good luck, we hope your beautiful blooms last as long as possible!